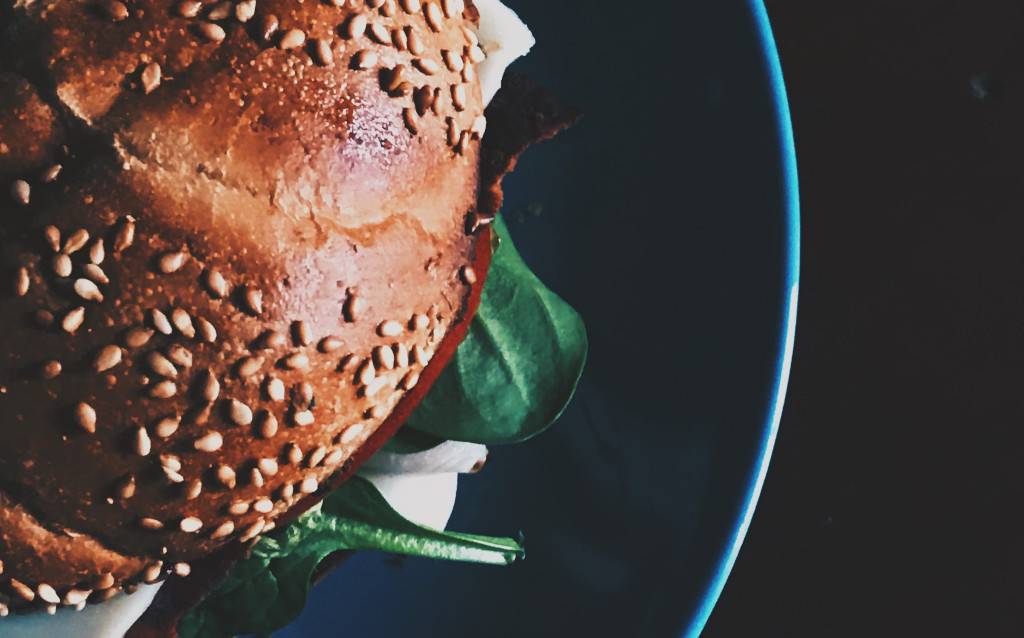 Vegans pertain to people who get all their food strictly from plant sources. Fortunately, many common ingredients that are used for making bread or buns can also be sourced from plants. For instance, sodium caseinate, which is generally derived from cow’s milk, is used for increasing dough height for low proof time and can alternatively be derived from soy milk or coconut milk.

Any food that contains components that are sourced from animals, including animal-derived oil ingredients like glycerine, collagen, among others, is not considered vegan. Therefore, vegan burger buns are buns that are free from any animal products, including milk, eggs, dairy products, and sugar.

They can perfectly complement your veggie patty to make veggie burgers. While burger buns are generally made of plants, some of its ingredients does not make it vegan. However, many vegan buns are available in the market.

Why Not All Bread Is Suited Vegan?

The basic ingredients for bread are flour, yeast, water, and salt. These ingredients are not from animals. Flour comes from plant grains such as corn, rye, rice, and wheat that are made into a fine powder. Yeast, which is used for the leavening of bread, is comprised of one cell, fungi organism, called Saccharomyces cerevisiae. Water and salt are natural elements. Thus, bread is traditionally suitable for vegans.

With the mass production and commercialization of bread, many bakeries or bread manufacturers have commonly added ingredients in bread as fillers, stabilizers, texturizers, and flavor that are sourced from animals. Milk, eggs, dairy products, and sweetening ingredients are included as typical ingredients, which make bread not appropriate for vegans.

What Bread Sweetening Ingredients Are Not Vegan?

Sugar and honey are the most common sweetening ingredients that make most commercial bread not considered vegan.

Sugar comes from sugarcane, which is crushed to extract the naturally sweet juice from the pulp. However, sugarcane juice is then treated, sifted, and decolorized with bone char, a natural carbon derived from bones of cattle. This is the animal product contained in most refined sugar.

Honey, on the other hand, is a naturally sweet, dense golden liquid produced by bees using the nectar of flowers. Bees are insects and, therefore, animals. This makes bread with honey not suitable for Vegans.

Which Buns Are Vegan?

While many burger buns are vegan, it would be easier to purchase buns that are explicitly vegan to prevent one from accidentally consuming buns that contained products or ingredients that are derived from animals. Hereunder are some vegan buns:

Ezekiel bread — This is one of the most popular bread products that are known for being vegan. Manufactured by Foods for Life company, which is known for making all of their products egg, dairy, and honey free. Ezekiel 4:9 Buns is entirely vegan and mainly marketed for making veggie burgers.

Nature’s Own 100% Whole Wheat Bread — Nature’s Own generally do not add animal-sourced ingredients in their dough conditioners. The hamburger buns and hotdog buns for that matter are vegan. However, they also have other bread products that may contain animal products, particularly honey and fish oil (Omega 3), which are clearly marked or indicated.

Arnold bread hamburger bun — The hamburger buns from Arnold brand is one of the tastiest burger buns available on the market. While they are equally famous for meat hamburgers, they are equally suitable for vegan burgers because the buns are vegan. They don’t contain milk products. Note, however, that the bread manufacturer also has bread products that are not vegan.

Other vegan buns — Aside from those above that are many brands making vegan bread. However, not all of them offer vegan buns. Here are some brands that offer vegan bread: Cobblestone Bread Co., Bloomfield Farms, Aldi, Dave’s Killer Bread, Ener-G, Manna Organics, Rudi’s Organic, Simply Nature, and Veganic Ancient Whole Wheat. Note that you need to check if they offer vegan burger buns.

What Is a Vegan Bun Made Of?

A vegan bun is made only of dry yeast, wheat flour, water, and (sea) salt.

When it comes to vegan buns, the general idea is the healthier recipe constitutes fewer ingredients that sound familiar to you. The more ingredients contained in it, which seem strange, difficult to pronounce, or very technical, means these ingredients are most likely used as preservatives and may or may not be plant-based.

Can You Make Your Vegan Bun?

You can make your vegan bun by yourself as an alternative way to ensure that you are using a vegan bun for your burgers. There are plenty of DIY tutorials on how to make a vegan bun available on this website. There are also ready-made products available which you can readily use and mix to create homemade vegan buns.

The trick to making your vegan buns is to replace main ingredients that are usually sourced from animals with plant-based alternatives. For instance, instead of using cow milk, you use almond milk. You can substitute coconut oil for butter or margarine. To replace eggs, you can create a flax egg by grinding flax seed in water. Instead of using refined sugar (white, washed, powdered or brown sugar, use beet sugar (e.g., Zulka, Billingtons, Red path, Sprout’s sugar, etc.)

Finally, you can also make veggie burger patties yourself.

What Ingredients in Burger Buns Makes It Non-Vegan?

Because the ingredients of vegan buns are pretty simple yet diverse, one way to check if a bun is not vegan is to check its ingredients. Here is a list of ingredients which if found in your bun means that the bun is a not vegan bread:

Casein — Whether sodium caseinate or calcium caseinate, this biochemical is a kind of protein that is naturally found in the milk of mammals, including humans.

As a typical ingredient for meal preparation, casein is used to improve the volume or quantity of bread. It facilitates tolerance to fermentation, which allows the dough to be fermented longer without damaging quality. It also increases the amount of water to be absorbed, allowing bakers to produce more bread for a specific volume of flour.

Whey — This is the residual liquid after milk has coagulated and strained. It is used in making bread as it helps improve emulsification, solubility, and water binding.

Milk — Aside from the importance of milk-derived ingredients e.g., whey and casein in the bread-making, the addition of milk in bread buns helps increase the nutritional value of bread. Milk is generally sourced from cows, sheep, goats, and other similar animals.

Butter / Margarine — Butter is a dairy product created by whipping milk. Margarine is its common substitute. Both these ingredients give bread tenderness. They also improve flavor and increase shelf life of bread.

Ghee — Ghee is clarified butter made by skimming milk from domesticated animals like cattle and sheep. It is used as an alternative to butter for its lower lactose content.

Lard — Lard is essentially pig fat used for lubricating dough. It helps keep gases from getting discharged during baking to make bread well-risen loaf and to achieve a soft crumb. It also provides a new flavourful taste to the bread.

Honey — This sweet viscous liquid from bees is used as a healthy organic alternative to sugar to provide a pleasant flavor of the bread.

Yeast is considered vegan, but technically it is not vegan.

Fungi are not classified as plants because they don’t contain chlorophyll, a green soluble compound unique in plants used for making their food through photosynthesis. Like other fungi, yeast is parasitic. They rely on their hosts for food.

Another common fungus that vegans eat is mushrooms. They commonly use this fungus in making meat alternatives, including veggie burger patties.

Do Burger Buns Have Dairy?

Most burger buns have dairy products. A few others don’t.

Although dairy products are not needed to make burger buns, many manufacturers prefer adding dairy products such as milk, eggs, and butter for making bread and other baked products because of its nutritional value and another vital effect on bread (texture, emulsifier, thickening, rising, etc.)

The use of dairy and refined sugar, which contained animal char, is also commonly practiced. While plant-based alternatives are available, refined sugar and other animal-sourced ingredients are cheaper and more readily available in the market.

It is, therefore, necessary for a vegan to ask a retailer, manufacturer, waiter, or anyone familiar with how the bread or bun was made to make sure if the product contains dairy ingredients and that is genuinely vegan.

Walmart is one of the most popular places that Americans go for doing groceries or shopping for food. This retail giant has the biggest selection of products for all types of people.

As a retailer, Walmart sells different brands of bread products and burger buns. Since most bread manufacturers or bakeries use dairy ingredients and sugar in their bread, most of the hamburger buns sold in Walmart are not vegan.

McDonald’s buns are not vegan.

While their buns don’t contain milk or eggs as ingredients, they, however, include refined sugar, which vegans commonly fail to take note. The use of refined sugar in McDonald’s buns does not qualify it to be vegan.

Some vegans accept the use of refined sugar as tolerable, thus considering McDonald’s buns vegan. After all, the buns are free of milk, eggs, or dairy products. However, the toasting process for these buns contaminates the bread with other ingredients that contain milk or animal products. Thus, McDonald’s buns are still considered not suitable for vegans.

Milk, butter, eggs, and sugar are the most common animal-derived products that are used for making bread, including burger buns. If anyone of these ingredients is included, a burger bun is not vegan.

Vegan buns are available on the market. However, they are usually specially-marked. You can also make your DIY homemade vegan bun.

When purchasing a bun, it is advised for vegans to check the contents of the bread to make sure that the product is free of any animal-derived products or ingredients.