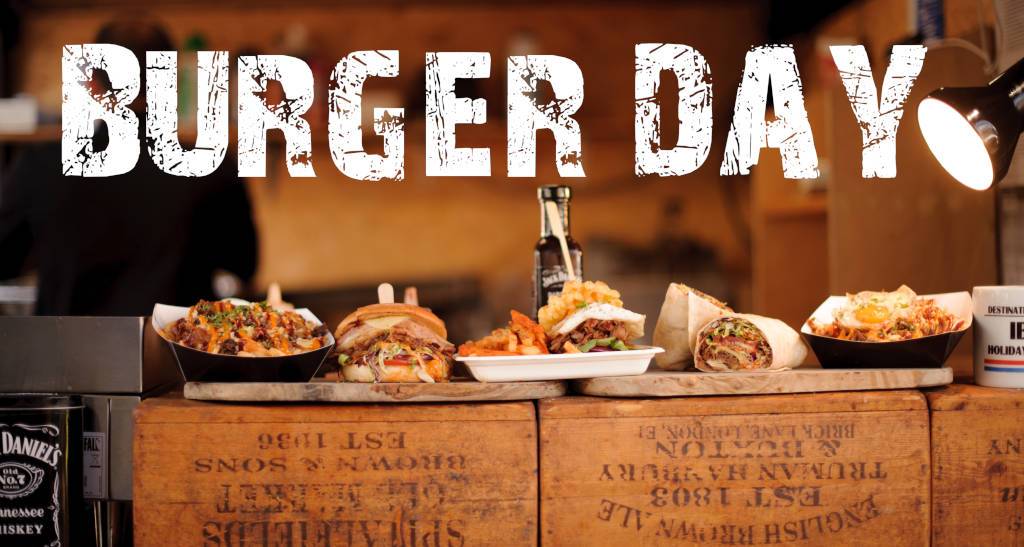 The National Hamburger Day or simply Burger Day in the US is traditionally celebrated on the 28th of May every year. Incidentally, the National Brisket Day also falls on the same day. Burger Day is a made-up holiday for celebrating burgers. It became a celebration of people who love and appreciate hamburgers by practice.

Burger Day has no official date that is set by the government or any authority. Some hold the National Hamburger day on July 28th in line with the belief that Louis Lassen invented the popular meal in New Haven, Connecticut on the same date. Others mark December 21st as the National Hamburger Day for some arbitrary reason. Other countries also hold Burger Day on different dates. The UK, for instance, hold their National Burger Day on the last Thursday of August. The varying dates and multiple times Burger Day is celebrated every year only shows that one day is simply not enough to celebrate hamburgers. They are so good that we just can’t get enough of it in a day.

Who Created It? History

No one knows for sure who started or when the burger day was created in the same way that no one knows who invented the burger in the first place. What is certain though is that the person who founded Burger Day was someone who truly appreciates the burger so much so that he or she established a day to honor and appreciate one of the most iconic foods in American history and culture.

Hamburgers have become a modern-day culinary dish in western culture. In the same way that noodles are often identified with the Chinese, the hamburger is the food that is identified with Americans. Because of this, it is but apt for people to dedicate one day to celebrate this iconic food.

Moreover, hamburgers are truly a quintessential American meal with over 50 billion burgers consumed by Americans every year, accounting for half of all sandwiches sold. According to McDonald’s, the most popular American fast-food chain that is responsible for the global popularity of hamburgers, the company sells around 75 burgers every second in the US alone. These facts show how prevalent and indispensable hamburgers have become in modern American society. The foundation and celebration of Burger Day are therefore just and due considering the meal’s important role in satisfying the appetite and hunger of the American people.

Origins of the Hamburger

The term hamburger was accordingly derived from the name of a city in Germany called Hamburg, which is the second-largest city in the nation. Following the etymology of the word, many people ascribe the invention of hamburgers to Germans who brought the food to America during the 18th-century immigration.

Moreover, the meat grinder, which is a device used for mincing meat to create a patty was invented by Karl Drais, a German engineer. Meanwhile, a German chef named, Otto Kuasw, served beef patty inserted in toasted buns with fried egg called Deutsches Beefsteak in Hamburg, Germany sometime in 1891. These coincidences support the belief that hamburgers originated from Germany.

The idea of mincing meat, however, can be traced back to the ancient Roman and Mongolian empires. Early ancient Roman cookbooks describe a baked beef patty called isicia omentata, believed to be an early precursor to the hamburger. Meanwhile, historical accounts reveal that the Mongols brought the idea of mincing meat to Russia. Mongol warriors minced horse meat which they carry under horse saddles and eat on the go. This would later find its way to Germany and the rest is history.

In the US, many people lay claim to pioneer the invention of the hamburger. One such claimant is a couple from Canton, Ohio named Frank and Charles Menches, who sold the first hamburgers in 1885 in the Hamburg Fair in Buffalo, New York. Another forerunner is Charlie Nagreen, who sold pork meatball sandwiches at the Outagamie County Fair in Seymour, Wisconsin.

Whoever first invented and introduced hamburger in the American commercial market was truly a genius. What is clear based on the foregoing facts is that the burger came into existence sometime early in the 20th century during the industrial revolution when many workers needed a quick meal that is easy to prepare and that is ready on the go.

Who is Celebrating It?

There is no particular location where Burger Day is exclusively celebrated. There is also no specific organization or institution that leads to its national celebration. Instead, anyone can celebrate National Burger Day. Many local fast-food restaurants across the US that specialize in hamburgers observe and lead the celebrations by providing discounts, promo and special offers in their store outlets. Ordinary people who love hamburgers celebrate Burger Day by holding burger grills at home or in picnics with family or friends.

Many restaurants in the US celebrate National Burger Day on May 28th. However, no matter what random date it is celebrated, what is certain is that there is going to be a surge of hamburger sales for that day.

In celebration of the Burger Day, many local fast-food restaurants provide special offers to promote their hamburgers. Some of them sell burgers for a dollar. Some give away free burgers for their first few customers. Some offer big discounts on burgers, buy one take one promo, eat-all-you-can burgers for a specific price, online coupons, and other promotional gimmicks. The main idea is to entice people to gobble a tasty hamburger in their restaurant for that day.

Does it mean you get Burgers for Free?

Yes and no. Some restaurants give away burgers for free for their first 50 customers for example. Others sell their burgers for a dollar which is as good as being free. Most sell their burgers at a minimal or discounted rate. Still, others give freebies like unlimited soda or free French fries if you avail of getting their hamburger. Burger Day is a great day for eating burgers because many restaurants offer discounts and freebies to entice you to eat their hamburger in observance of the holiday celebrations.

Incidentally, Lionel Sternberger from Pasadena, CA claims to have invented the cheeseburger in 1926, which he introduced at his parent’s sandwich store called the “Rite Spot”. Still, others prefer the National Fast Food day that falls every November 16. This holiday also involves celebrating hamburgers which are a staple among mass-produced food along with hotdogs, pizza, and sodas.

The Burger Fest in Seymour

Seymour, Wisconsin holds an annual Burger Fest every Every August 9th and 10th. The festivities are held in honor of Charlie Nagreen, a native from this small town, whom they claim to have invented the hamburger. The town even put up a statue in honor of Nagreen. While the celebration remains a local holiday, it attracts tens of thousands of visitors annually. Subsequently, the town calls itself the Home of the Hamburger on the belief that it is the birthplace of hamburgers. The festivities included fun runs, car exhibitions, balloon ride, games, musical concerts, parade, giant ketchup slide, and hamburger eating contests.

National Burger Day in the UK

The United Kingdom celebrates Burger Day on the last day of August. Hamburgers have recently become popular in England. However, the Brits are fonder of premium posh burgers than the regular fast food type burgers. Burger Day in the UK was invented by Mr. Hyde and is supposed to be a day meant for indulging in hamburgers guilt-free. Aside from giving people a pass or excuse to treat themselves with a juicy hamburger, it is also seen as a marketing technique as many restaurants across the UK partake in the celebrations by offering discounts on their hamburgers. Burger lovers also anticipate the celebrations because many burger joints introduce limited-edition recipes of burgers only available on that special day.

How to Celebrate Burger Day?

The most typical way to celebrate Burger day is to visit a local hamburger store and enjoy one. You can also opt to find a hidden gem in your town and try out the unique take on their hamburgers.

Media helps provide mileage to the celebrations by creating special segments or featured shows dedicated to a discussion of hamburgers on the day. This can feature hidden hamburger joints, a documentary about hamburgers or anything about hamburger cuisines that are available in a state or across the country.

Ordinary Americans usually celebrate the holiday by eating out with their families. For a change, they try out a new hamburger in different fast food. Others opt to organize a hamburger grill party with their neighbors or hold a hamburger-themed party with friends and relatives. You can also try experimenting by creating your homemade hamburger and putting ingredients that you think will enhance its taste. However you choose to celebrate the day, the bottom line is for you to enjoy the day with your favorite all-time hamburger. This is the day to relish the taste of the hamburger without any hesitation or second thoughts. This is the day to fully enjoy hamburgers!