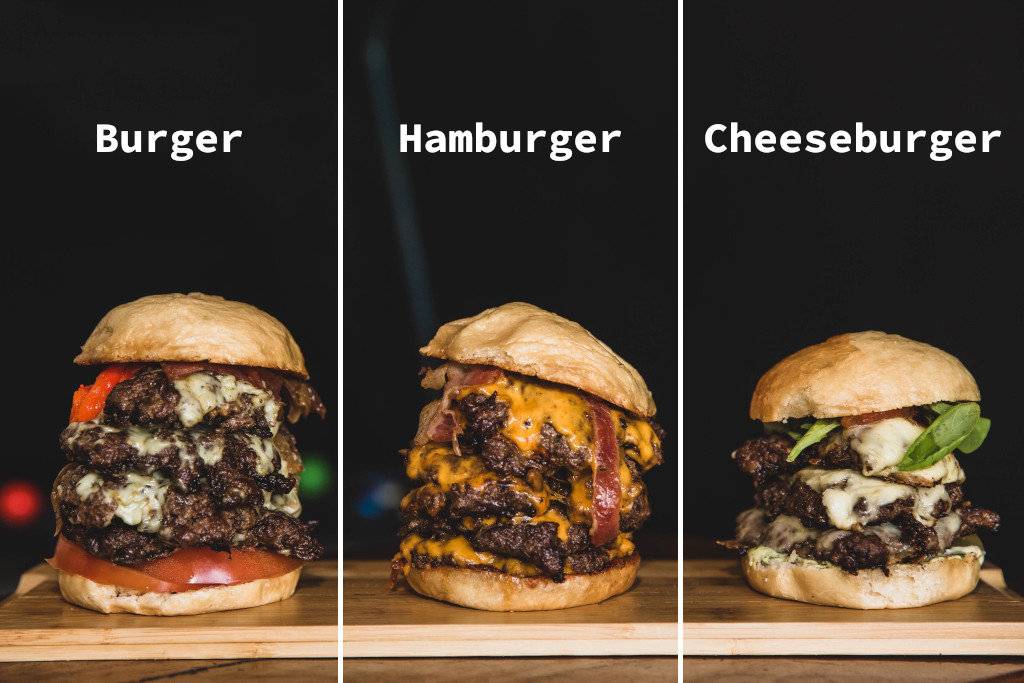 People love hamburgers because they are tasty, cheap, diverse and everywhere. Practically all restaurants are selling burgers, which shows how popular burgers are.

A hamburger is a meal or dish comprised of ground meat, usually beef that is placed in a bread bun. People usually add a variety of garnishes and condiments to hamburgers such as cheese, tomato, ketchup and mayonnaise among others. Some people call hamburgers as a burger for short. When cheese toppings are placed in the burger, it is called a cheeseburger.

Why the Burger Is Called Burger?

People are inclined to shorten popular or common words in English to make it easier and quicker to say or easier to pronounce. We especially do these things, events or ideas that we love. This also helps facilitate quicker dialogue or discussion with people. For instance, we say lab for laboratory, legit for legitimate and veggie for vegetables. In the same manner, a burger is a short term for a hamburger. You can also consider the term “burger” as an affectionate nickname for a hamburger.

As a short term for the hamburger, the term burger can refer to the whole meal i.e. the ground beef, bread buns and any condiments added to it. This is especially true in the UK. In other countries like the US, however, the term burger may specifically refer to the ground meat that is rounded or the patty. This is why a grounded beef patty without the bun that is grilled and served with sauce is called a grilled burger and not a hamburger.

With the evolution of hamburgers particularly the invention of its variations, the term burger was attached to describe the hamburgers made with different ingredients. For instance, a veggie burger is a hamburger that uses vegetables as patty while a turkey burger is a burger in which turkey meat was used and so forth.

A hamburger is called a hamburger because of its origins, specifically Hamburg, Germany. In the same way, people sometimes call hot dogs as frankfurters because they came from Frankfurt, Germany.

The present hamburger has been commonly believed to evolve from the Hamburg Steak, which reached America from the city of Hamburg in the 19th century. This Hamburg-Style dish which is similar to the Salisbury steak is considered the predecessor of the hamburger because it featured the standard chopped or minced meat which is similar to the present day burger patty. To learn more about the history of hamburgers, read the article about the burger day and it’s celebration.

The term burger in German, on the other hand, is used to indicate origins. Thus, hamburger means “from Hamburger”. People of Hamburg are indeed called Hamburgers. In the same way, the term hamburger that refers to the popular dish signifies that such a meal came from Hamburg. And that is why a hamburger is called a hamburger.

Why Is a Hamburger Not Called a Beef Burger?

What is the difference between a hamburger and a cheeseburger?

There are numerous variations of a hamburger depending on the ingredients, meat, condiments or techniques used to make it. For restaurants that serve burgers with cheese or without cheese however, the term “plain” burger, which means without cheese, is used to distinguish it from a burger with cheese or a cheeseburger. This is important because some people do not like cheese or are allergic to cheese.

What Is the Difference Between Sandwiches and Burgers?

A burger sandwich or hamburger consists of ground meat placed in a bun. The ground meat and the bun are the two things that constitute the essence of a hamburger, which makes it different from any other sandwich. If the meat is not ground or minced, it is not a hamburger.

Using plain beef steak inserted in a bun is not a hamburger but considered a sandwich. A bun, on the other hand, is a bread roll that has a round shape and with a rounded top and flat bottom. You slice the bun in the middle to place the patty. The shape of the bun is what entails the ground meat to be rounded and flat as well. Using sliced bread does not make a hamburger but a sandwich.

Applying this difference, if you put a whole chicken breast or stripped chickens in a bun, this does not make a chicken burger but a chicken sandwich. This is because the chicken is not ground and made into a patty. Incidentally, making a chicken sandwich entails using sliced bread.

What Part of a Cow Is a Hamburger?

Practically any meat part of the cow can be minced and made into beef patties to make a hamburger. However, there are special or best cuts of beef that are specially used for burgers. They are as follows:

Chuck steak — This is a primal cut of beef which constitutes a large section of meat from the shoulder of a cow. This is the most popular cut used for making burger patties because of its balanced lean-to-fat ratio.

Sirloin — Also called Tri-Tip, it is a lean steak cut from the rear back portion of a cow. It has higher fat content than the chuck.

Round — This is cut from the rear leg of the cow. It further consists of eye bottom round, and top round.

Brisket — This beef cut is taken from the breast or chest of the cow, which included superficial and deep pectoral muscles. This is usually tastier because of its high-fat content.

Boneless Short Rib — This is cut from the chuck eye roll or plate. The bone rib is removed. This type of beef cut makes an exceptionally moist and juicy burger.

Plate — This is a forequarter beef cut from a cow’s belly. This cut is usually cheap and fatty. It creates patties with acerbic and piquant flavor, which can make fancy burgers.

What Meat Is Used in a Hamburger?

The original and traditional meat used for making hamburgers is beef (cow meat). As mentioned above, there are also particular cuts of beef that are used for making great burgers. However, hamburgers also evolve to match and respond to the evolving needs and preferences of the people. This resulted in the use of other types of meat for making burger patties. However, any meat that is used in burgers is minced.

The common alternative to beef meat is pork (pig meat) which is relatively cheaper. For health reasons, chicken meat and turkey meat are also used. In countries where pork and beef are not allowed to eat for religious reasons, mutton, lamb, or hogget meat is used.

For people who do not eat meat, fish meat is used. Typical seafood used for making patties included salmon, cod, tilapia, haddock, and shrimp. People who are vegetarians, created patties out of vegetables. A veggie patty may include soybeans and tofu, mushrooms and some grains.

Finally, some people tried on experimenting with some meats that are abundant or distinctive in their place. Other meats that are used included buffalo meat, carabao meat, bison meat, elk meat, kangaroo meat, camel meat, ostrich meat, deer meat, and even alligator meat, among many others.

Is There Ham in a Hamburger?

There is no ham in hamburger. However, you can add ham, bacon and other toppings to a hamburger. A ham is a processed pork cold cut usually from a pig’s hind legs that are preserved through curing. Putting ham in a bun makes a ham sandwich, not a hamburger.

Is Burger, a Burger Without the Bun?

Yes and no. In the UK, the term “burger” refers to a complete hamburger dish meaning the ground meat in a bun. Without a bun, therefore, a burger is not a burger. However, in other countries like the US, the term burger can also mean to refer to the patty alone. Thus, you can serve a burger without a bun and can still call it a burger.

In Wendy’s for instance, you can order a burger without a bun. The burger can instead be wrapped in lettuce. In some restaurants, you can also order a burger steak. This is a meat (beef) patty served without a bun on which gravy or sauce may be added. In both cases, the burger is no longer considered a sandwich.